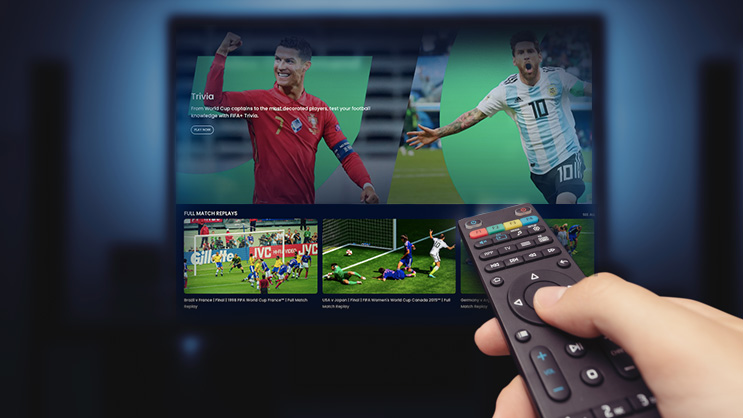 FIFA has launched its own free streaming service FIFA+ to connect soccer fans across the globe.

FIFA is the first sports federation ever to offer such an extensive streaming and content experience to its fans.

Live Matches:
By the end of 2022, FIFA+ will be streaming the equivalent of 40,000 live games per year from 100 Member Associations across all six confederations, including 11,000 women’s matches. FIFA+ offers live coverage from Europe’s topflight leagues to previously unserved competitions from around the world in men’s, women’s and youth football. From launch, 1,400 matches will be live streamed monthly on FIFA+, rising rapidly.

FIFA+ Archive:
FIFA+ will be home to every FIFA World Cup and FIFA Women’s World Cup™ match ever recorded on camera, totalling more than 2,000 hours of archive content. For the first time ever, this entire archive will be available to fans. Fans will have the ability to watch full-match replays, highlights, goals and magical moments all in one place. The FIFA+ Archive will launch with more than 2,500 videos dating back to the 1950s, with many more to come throughout the year.

FIFA+ Originals:
Full-length documentaries, docuseries, talk shows and shorts – localised into 11 languages, telling stories from local grassroots to national teams and footballing heroes past and present from more than 40 countries.

The service is available across all web and mobile devices here. No subscription is required, the service is ad-supported. It will be available in five language editions (English, French, German, Portuguese, and Spanish), with an additional six languages to follow in June of 2022.

FIFA+ now has exclusive titles including:

– Ronaldinho: The Happiest Man in the World - An exclusive, feature-length documentary offering extensive access to and never-seen-before archive of one of the most iconic players to have played the game.
– Captains: Season 1 - A ground-breaking 8-part series from Fulwell 73 (Sunderland ‘Til I Die, All or Nothing: Juventus) following six captains as they lead their countries through qualification for the FIFA World Cup Qatar 2022™.
– Golden Boot – An original 4 x 48-minute docuseries interviewing the greatest FIFA World Cup goalscorers, produced by Goalhanger Films (Wayne Rooney: The Man Behind the Goals). Episode 1 sees Gary Lineker sitting down with Brazilian great Ronaldo Nazário to rewatch the 2002 FIFA World Cup.

– Academies – The inside story of some of the greatest talent production lines in world football from Shoot the Company. Season 1 tells the story of RSC Anderlecht across 3 x 30-minute episodes.

The maiden edition of the INFLUENCERS’ CONFERENCE is set to take place in Accra on ...